This article is brought to you by Turtle Beach and the new Recon Camo Headset.

With E3 long in our rearview mirror, it is that time for the game developers to make good on the promises for the end of year titles. September gave us an arsenal of titles, but fear not there are plenty more to wrap up the end of the year to keep you busy through the winter.  Here are our thoughts on some of the best up and coming video games to hit the market before the end of 2017.

Over 700 full on premium cars, an exclusive deal with Porsche, new body kits, wheels, new campaign, customized driver looks, the list goes on and on. Don’t be fooled into thinking it is the same game as the last one, they rebuilt it from the ground up. Utilizing the Xbox One X, Forza fans will see a flawless experience, even before the One X’s release date. Fear not fans, the 4k upgrade will be available for free on launch day.  It is something that comes highly recommended. From creating a new weather system to the rattling of the exhaust they have thought of everything to immerse the gamer into the driving experience.  The major goal of Turn 10 studios is also to curate that experience. Bringing together the Xbox and PC gaming communities is one of the many ways the experience will only grow stronger.  Going up against those that dominate their realm should push the game to a whole other level of competition.  This game is all in the details, and we can see why.

Gran Turismo has always been one of the front-runners in the racing community, neck and neck with games like Forza 7. Think you know everything about cars?  Guess again.  Gran Turismo is a game to really show how little you know about racing and the cars themselves.  Do not worry fellow gamers, they hold your hand throughout the whole driving experience. Dropping the championships, competitions, and dealerships Gran Turismo now focuses on the art of driving.  With the “driving school” becoming the main objective of the campaign, limiting to the missions to improve driving etiquette. Another big change is the number of cars that will be available on launch day, a mere 177 compared to 1074 in Gran Turismo 5.  This time the cars have been remodeled from the ground up, every car is perfectly recreated.  New concept cars will be available for those who crave ultimate power.  The scenery on all 19 tracks is incredible. It makes you take your eyes off the road for a second and admire, only for a second. Car physics play a big role in the gameplay, also fine-tuning your car is to maximize the overall performance, then challenge those from all over the world.

Pre-Order
The Evil Within 2

Forced to reenter the STEM machine Sebastian as he travels to the city of Union, a world created by the mind of Sebastian’s daughter Lily.  After years of believing her to have been killed in a house fire, he finds out she has been kept alive by the creators of the STEM machine, a cruel punishment for any father.   With Lily’s mind at the core of Union’s very creation, the warped city seems to be taken over by another, the demented mind of Stefano Valentini.  Thus brings forth the horrible creations that seem to spawn from the pits of hell.  In order to save the mind of his daughter, Sebastian must travel deeper into the corruption known as the evil within.  Chilling new monsters with all the gore of the first.

By far the most hyped games of the year. Not sure what else to say about this game besides it is the Mario game we have all been waiting for.  We all know it is going to be fantastic.  Going back to sandbox style worlds is the greatest thing they can do, rewarding for those who explore every nook and cranny. The player again has the ability to explore these gorgeous worlds at their own leisure.  Utilizing the new features that capture cap, players gain abilities of certain foes to interact with the world around.  Those abilities help Mario complete his objectives of collecting power moons.  Without usage of game-over, will take out the thrill of the fight?

Another round of an old classic brought back. Playing again as “Terror-Billy”, your victory from the first one was only short lived.  You are back to resistance keeping those Nazi’s in check.  The second round of Wolfenstein is more intense than the first, with the non-stop action the game never seems to slow down.  Within the new horrific experiments add to a craziness of the battle, the protagonist adds his humor as no one else can.  Stealth has become more incorporated into the gameplay but does not seem to last long before all hell breaks loose.  Guessing the run and gun style is the way to go. Welcome back to the classic world of awesome.

It only took until the tenth major installment in the Assassin’s Creed series to circle back to where it all started. Die-hard fans rejoice in the knowledge of finally being able to know how it all started. The stunning world of Eygpt has never looked so amazing and without all the load screens.  Developers claim to be able to run from one side of the insanely large map to the other with those awful pauses.  Meaning, however, the map will be smaller than others in the past.  Making use of a new eagle companion will help cover that ground a lot faster, also helping with the stealth aspect, scoping out the lay of the land for the best way to take foes down.  Another exciting element is the ramping up of the combat system.  No longer will we just sit back and wait to parry an attack.  Definitely looking forward to the change. Can not wait to actually have answers about the start of the assassins order.

Call of Duty fans will not be disappointed by slipping back in time to an era without mech suits and wall running abilities.  The developers decided to get back to the “grit”, the thing that made this franchise a cut above the rest. Set in the WW2 era the game features, you start off as a 19-year-old kid first experience the horrors of war. Storming the beaches of Normandy, you must overcome the fear to survive. Slowly you grow into a man while taking down the axis power in numerous famous battles.  This sounds like a wonderful heart-wrenching story of adolescence but we really are here for one reason… The Multiplayer. And of course, they improved that as well.   Headquarters mode is a massive upgrade to the experience by allowing you to obtain objectives, chat with friends, or hone your overall skills all while being in a non-combat zone.

Wipe those tears of joy from your cheeks and withhold screaming like a 5-year-old girl.  Three times the content from the first installment!  This means more heroes (14 total), more locations (18 total), and more vehicles (39 total).   With this being the fourth major installment of the Star Wars: Battlefront series and seventh overall, by now we should expect perfection.  Developers finally heard our voices and gave us the things we wanted. Star cards have been upgraded, allowing fans further personalize their favorite characters or ships.  5 amazing game modes to satisfy everyone style of play and with an upgrade system that rewards you for how you play not by how much glowing orbs you can get.  The list could go on and on. The game really only gets better each day that it gets closer to launch day.

Trey Parker and Matt Stone have done it again and created an RPG in the world of South Park.  Chalked full of all the wild antics of Stan, Kyle, Cartman, and Kenny you play as the main protagonist “The New Kid.”  This time the kids have fashioned themselves into superheroes and are in the middle of a civil war between the two sects.  The developers decided to change up the gameplay from the turn-based system of “Stick of Truth” to going for the tactical style RPG.  This change adds an extra challenge element to the game. The fellow followers of the T.V. series will definitely pick up on the random cameos from all our favorites.  Be prepared to laugh, cry, and be offended while hanging out in the wonderful world of South Park.

An up and coming stealth survival horror video game that I really tried to do as little research about as possible. Spoilers…  That is the reason behind it. The game just looks so incredible I can not bare myself to ruin any part of it. It was bad enough I watching multiple ways to get into the house, but watching anything else felt like I killing the experience. The objective is to sneak through your neighbor’s house to locate something in the basement.  That’s all I need to build the intensity for this game.  I have never been so excited to play a game while doing the absolute bare minimum.  I apologize if you were hoping to learn a good amount of information about this game but I refuse to do more. Once we get our hands on it you will know why. All I can say is well played Dynamic Pixels and TinyBuild, well played.

Another game that is coasting under the radar is Vampyr.  Adding the gothic horror element to an RPG just seems like a forgotten gem. Set in old-school London, it tended to give off a Jack the Ripper type vibe.  You play as a doctor that only recently that has turned into a vampire. The goal is to go out to investigate the citizens of London and learn about them while completing objectives for another doctor who has learned of your new abilities. Every single character has a back story along with all their secrets to help as you digress deeper into the world of shadows. As you learn more about the citizens you have the option to decide who lives and who dies.  Each time you do “embrace” a person you learn all their knowledge, the more you “embrace” the more powerful you become. The game thus multiple ways to play and each action has a reward or consequence.  This causes a wonderful moral dilemma. Be the doctor that saves the world or the villain who corrupts it. Which way are you going to go? 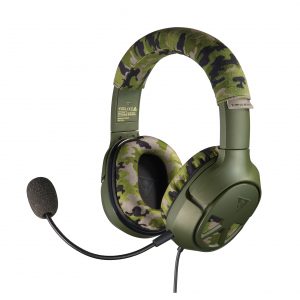 Those nerded out for all these games as much as I am then you will be also excited to hear that our friends at Turtle Beach are back at it again.  This time stepping up to the gamer plate and crushing it.  Finally adding some swagger to their Recon line of headsets.  The Recon Camo looks freaking incredible. With COD WW 2 coming out I can play the part but rock it too. As some might remember from reading my review of the Recon 150, I was shocked at how great those sounded.  The Recon Camo takes the 150 and completely brings it to the next level.  Still offering the amazing comfort for all-day gameplay, 3.5mm jack to be compatible with all devices out there, plus adding larger 50mm Speakers.  Just adding 50% more surface area than 40mm driver, no big deal! These bad boys will totally to give you a full advantage of those attempting to sneak up behind you.  The bad news is that like all these games you will just have to wait. The good news… it is available now for only $69.95.

This article was brought to you by Turtle Beach and the new Recon Camo Headset.