Launched in 2011 in collaboration with Joya de Nicaragua, My Uzi Weighs a Ton (aka MUWAT) is a medium bodied stick – brought to life by Subculture Studios, blended by cigar don; Johnathan Drew himself and hand rolled by the folks at JDN (Nicaragua’s oldest cigar company). The construction of this particular cigar is produced from Drew Estate wrappers and binders – with half the filler coming from both JND and Drew Estate. To say this brand is “interesting” or “unique” would be an understatement. So when we were given the opportunity to sit down with a 10-bundle of 5 X 60 robustos we gladly accepted and proceeded to light up! 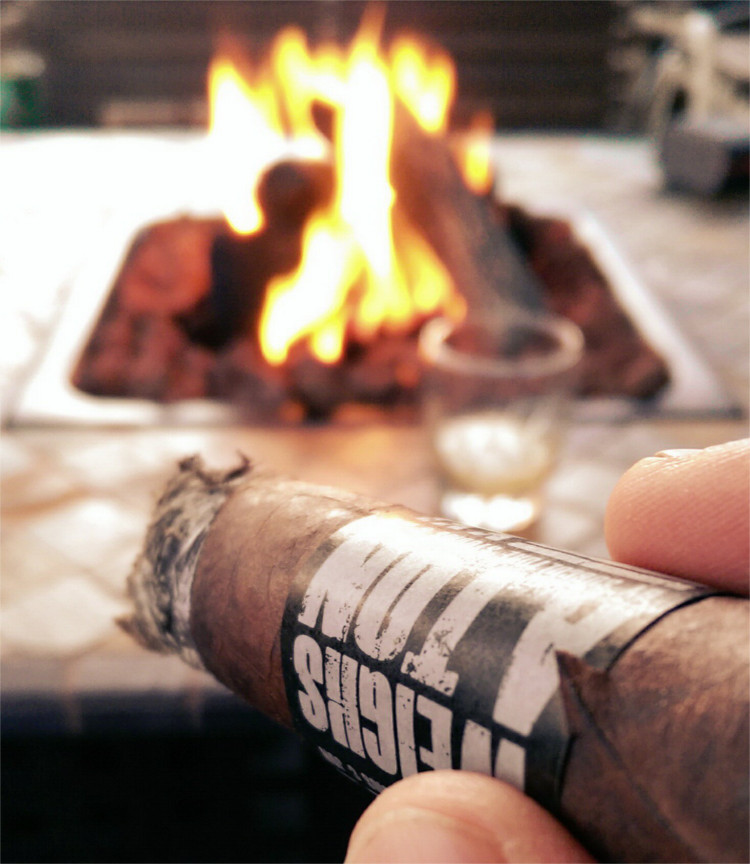 If the phrase “My Uzi Weighs a Ton” seems odd or eerily familiar you’re not alone. While Drew Estate’s literature on the origins of the MUWAT moniker would leave you to believe that Johnathan Drew picked up a bundle of his newly created cigars on the Joya de Nicaragua production floor – and surprised by their heft yelled out “Damn, My Uzi Weighs a Ton!” we all know he was truly inspired by Public Enemy’s 1987 lyrical gift to rap in their song:  My Uzi Weighs a Ton. Yeeeeeeeah boy! 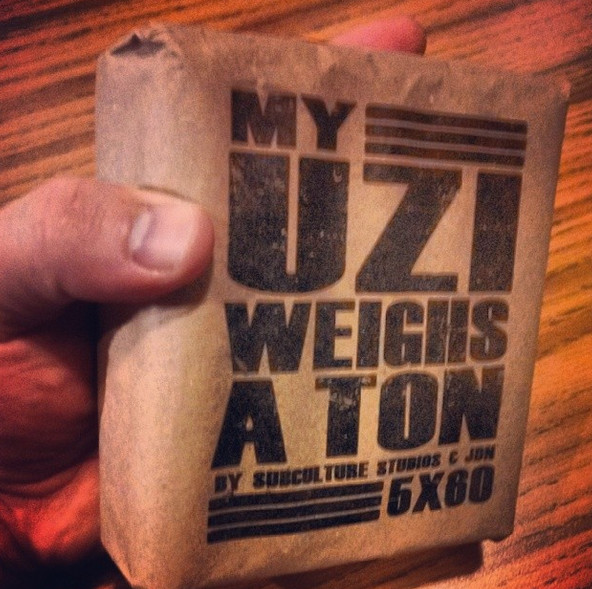 The overall build quality of these cigars is just fantastic, no glaring defects to speak of – you can absolutely tell these are hand rolled to perfection. The wrapper looks slightly oily, but beautiful and holds up very nicely all the way though. While they don’t actually weigh a ton, the MUWAT’s are pretty damn dense. We tested the 5×60 robusto version and found it to be a very sturdy stick through and through.

Though we mentioned just a moment ago that these cigars are sturdy and dense that doesn’t really effect the draw. In fact whether you like to cut or punch your stick the MUWAT delivers a great draw, lots of smoke and all the flavor you’d expect from a medium bodied cigar.

From first light to the final draw our robustos lasted 1 hour and 12 minutes on average. During that time the MUWAT stayed lit evenly with no major flaws in the burn pattern. Even after sitting for several minutes we found absolutely no need for touch-ups – producing some impressive ashes up to two inches and longer. 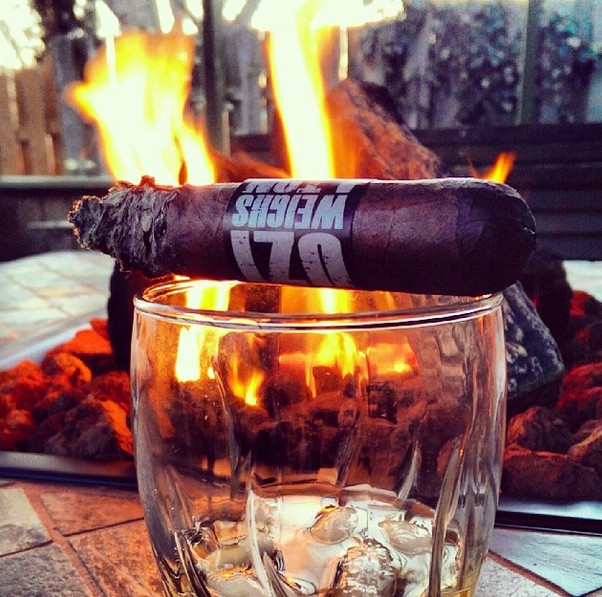 On the foot we picked up on some lite spices that are quite nice and some touches of coffee/coco what were very welcoming – most noticeable on the retrohale more than anything. As we progress through the first third we expected the complexities and flavors to pick up, but they never really did… and that’s not such a bad thing. The MUWAT is consistently mellow from start to finish. What you’ll notice more than anything else is the delicious flavors of coffee and chocolate with some spice on the finish that lingers beautifuly and keeps you coming back for more.

Paring: for the MUWAT we chose a few different vices to pair with, but in the end we landed on a cigar paring of Johnnie Walker Gold. I’m telling you… with a lit My Uzi Weighs a Ton in one hand and a low-ball of JW Gold in the other you can kick your feet up and truly set the night off right. Both complement each other very well.

Ranging from $7.00 to nearly $12 depending on the size. We found the MUWAT to be a tremendous value. We wish the burn length could stretch out closer to 2 hours, but we were very satisfied overall with this truly delicious stogie.

Buy Now: $7 – $13
My Uzi Weighs a Ton: Cigar Review
Overall, this was a very enjoyable cigar. Rather mild and not overly complex. In our opinion this stick would be an excellent choice for novices and aficionados alike. If you like cigars you're going to like My Uzi Weighs a Ton. It's not going to blow your mind, even though the name might have to thinking otherwise. This is just a great cigar to kick back and relax with.
Construction8.8
Draw9.2
Burn8.3
Aroma8.6
Flavor8.8
Value9
8.8Overall Score
Reader Rating: (0 Votes)
0.0