First brewed in 1975 – on the 200th anniversary of Paul Revere’s famous ride, Liberty Ale from Anchor Brewing is the first modern American IPA (Indian Pale Ale) to be brewed after the dark days of prohibition. It’s also the first single-hop ale and dry-hopped ale to be introduced to the United States. Liberty Ale is craft brewed in the heart of San Francisco, CA accodring to strict traditional brewing methods, and uses only natural ingredients, including – pale malted barley, fresh whole-cone Cascade hops and a special top-fermenting yeast, and water. 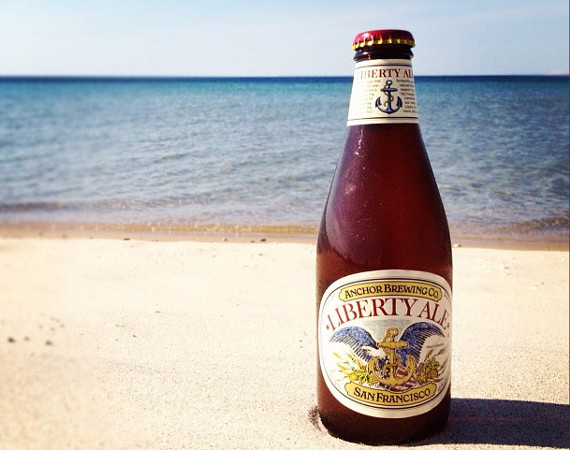 Photo Credit: @AnchorBrewing on Instagram
In the 1960s, Anchor was perhaps the most primitive small brewery in the world, but by 1971—the year they began bottling Anchor Steam beer they had perhaps the most modern small brewery in the world, with state-of-the-art quality control systems in place to ensure that their beers are always pure and fresh, from brewing, through finishing, packaging and transporting.
Recently we teamed up with with the Anchor Brewing crew and set up a tasting and review session with Liberty Ale which is one of their most anticipated Summer beers every season.

Overall: We give Liberty Ale a B+ (Highly Recommended) This APA (American Pale Ale) is a fantastic summer brew that delivers a bright and crisp refreshing taste. Liberty Ale is great when chilled icy cold on its own merit, but comes alive even more when accompanied by a fresh orange slice in our opinion. (don’t knock it till you try it!)
Liberty Ale finishes slightly bitter, yet kept us coming back for more. We found this ale to be quite hoppy, easy to sip and expertly carbonated for a smooth drinking experience overall. If you’re looking for a great summer brew to test yourself we highly recommend you seek out a sixer of Liberty Ale as spring begins to fade into summer!
Hot summer day + Liberty Ale = perfection! (Math is fun!)
Buy Now: $9.99 (6pk.) or go to: AnchorBrewing.com
Follow BustedWallet on: Facebook & Twitter