Annnnnd, we’re back, from a weekend of fun in the Sunshine State with our friends at Captain Morgan where we celebrated the launch of the new Captain Morgan Cannon Blast. We already knew the Captain knows how to throw a great party but they took this one to the next level. To go along with their new drink, they hosted the first bar crawl of its kind – the Cannon Blast Bar Crawl to be exact. While a typical bar crawl is always a good time, have you ever thought to yourself “Man, I wish this bar crawl had a massive cannon shooting a human cannon ball”? You haven’t? Well that means that Captain Morgan was 10 steps ahead when they decided to have ‘The Human Fuse’ himself Brian Miser launch out of TWO cannons in the streets of Orlando to kick off the product launch for the new Cannon Blast. 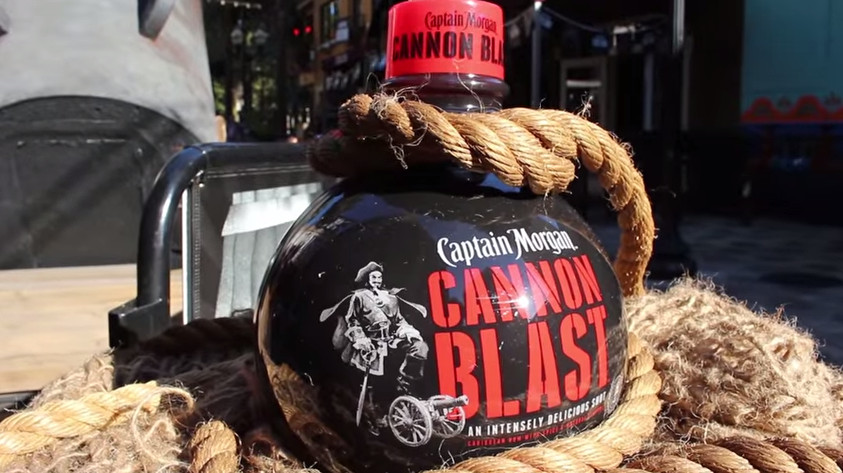 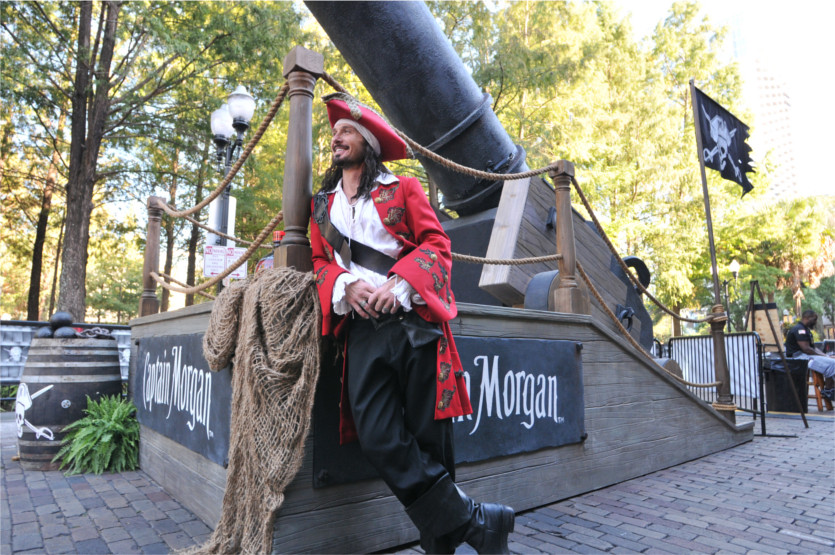 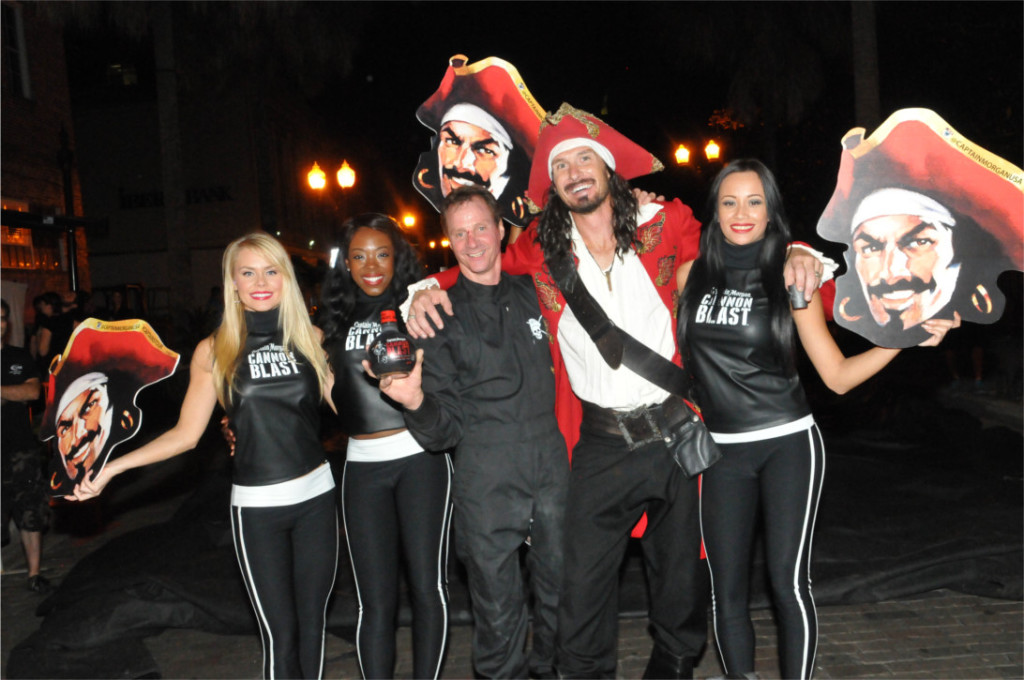 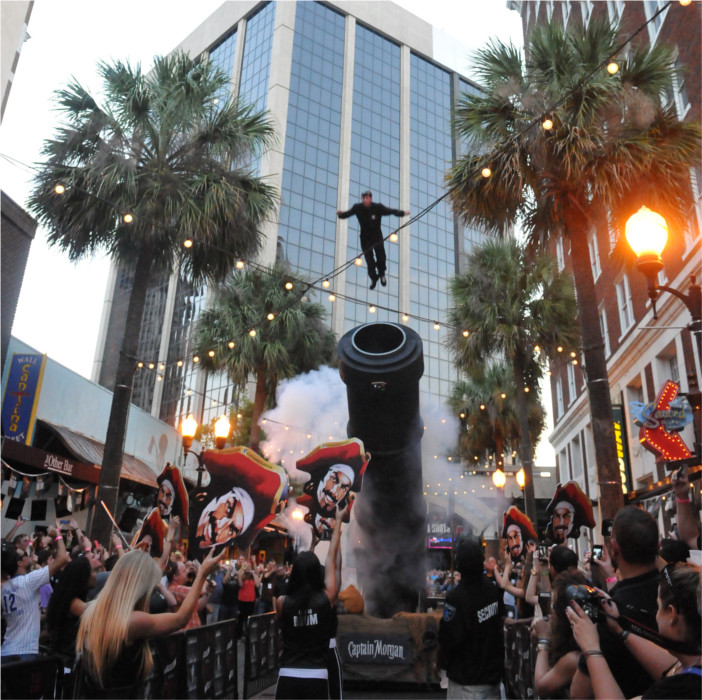 From the moment we spotted the two massive cannons set up along Wall St. Plaza we knew we were in for something pretty spectacular. Before the shots were fired, we had a shot of Captain Morgan Cannon Blast to get in the spirit. It’s a delicious shot of spiced rum and citrus flavors that’s even better when served chilled and unlike any ready to shoot drinks we’ve tasted in a while. And from talking to the hoards of folks at Wall St. Plaza at the event, it’s definitely a crowd pleaser. 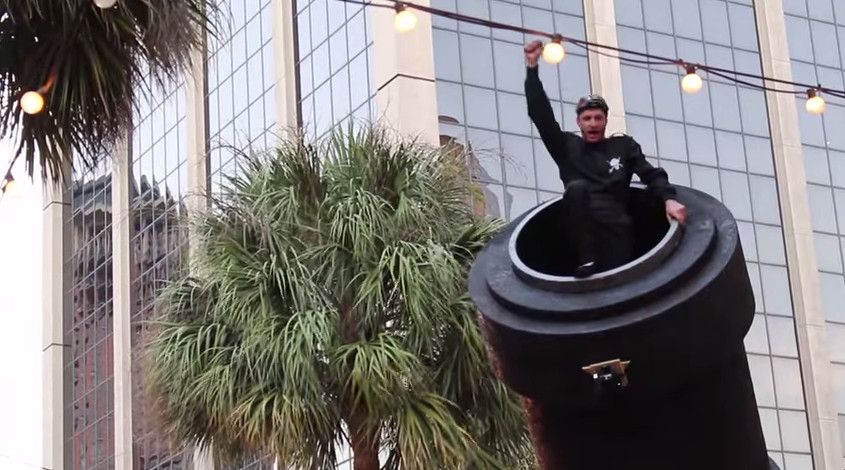 The man himself, Captain Morgan, was the host for the evening and he knows how to get the party started. He made his way through the event endlessly to welcome everyone, talk about how he excited he was for the new Cannon Blast and pump everyone up for the cannon blasts themselves.

Before the blasts we were able to meet up with the Captain as well as ‘The Human Fuse’ to get the lowdown on what we were going to be experiencing. We learned that Brian would be flying out of those cannons at about 65mph and as high as 5 stories in the air. Another fun fact is that it’s actually Brian’s wife who is the one to light the cannon’s fuse during each of his launches. Now that’s true love!

When the time arrived for the each of the launches, you could feel the crowd’s excitement escalate. Brian climbed up the cannon and slipped inside. Once he was given the signal, the Captain and the event goers started counting down from ten. At ‘one’ we all yelled ‘BOOM!’, smoke from the lit fuse raised into the air and *KABOOM* – there went Brian the human cannon ball flying over the streets of Orlando. The boom itself from the cannon was pretty jarring but Brian flew out of that thing with the grace of an Olympic diver. His gracefulness was no longer a surprise after we learned he has done this thousands of times. Thousands. This partnership with Captain Morgan and an actual human cannon ball to launch their new drink that comes in a bottle that is shaped like a cannon ball was genius.

Needless to say we had a blast – in more ways than one – with Captain Morgan at the launch of the new Cannon Blast. If you weren’t able to join the fun in sunny Orlando, check out our video coverage of the event below or by taking a look at our Facebook, Twitter, and Instagram.