If you follow Busted Wallet, then the Typhoon quadcopter from Yuneec may sound familiar.  Our very own Geno Mallo just recently got the opportunity to review the Typhoon Q500 4K.  After the review was over, it left most of us thinking that there is not much Yuneec could do to improve upon the stellar performing platform.

Yuneec just made the announcement of their brand new Typhoon G.  In the previous Q500, the 4K meant that the drone featured a 4K video camera.  But in the G version, the Typhoon will now seamlessly integrate with a GoPro camera! 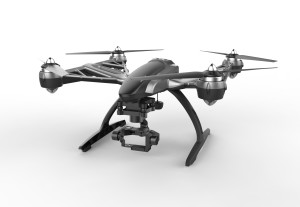 For other drones, a very common platform is to take the drone and mount a GoPro to it.  Most would agree that when it comes to compact video recording, the GoPro is the leader for the smoothest and clearest video and putting one on a drone is the best way to get aerial video without a full DSLR.  However using a GoPro on a drone comes with the tradeoff that a live video link often takes extra 3rd party video transmitters and even more 3rd party parts if you would like to see live telemetry data of your flight.  Traditionally making a flying GoPro not an “out of the box” option. 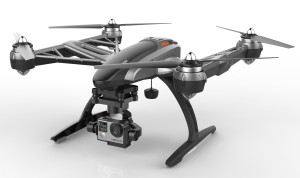 With the all new Yuneec GB203 3-axis self-stabilizing gimbal, the Typhoon G is able to integrate directly with the GoPro and provide the same integrated flight experience that the Typhoon 4K is able to provide.  This means an easy to control drone paired with a top-quality camera that can be viewed live directly on the 5.5″ ST10+ Android touchscreen flight controller straight out of the box from just over 1/4 mile away.

Just like its predecessor, the new Typhoon G and GB203 gimbal will also include the same SteadyGrip device that now will give you a mobile, handheld gimbal for your GoPro that can be viewed live using your mobile phone and the CGO app.  Gone are the days of shaky footage.  That buttery smooth image that makes a drone so special can now be achieved safely in close range on the ground.

“We believe the Typhoon G will be the aerial and ground imaging solution of choice for GoPro® enthusiasts because it provides the most stable imaging available,” said Tian Yu, CEO of Yuneec USA.

Another benefit of the Typhoon G is that if you are already a GoPro enthusiast and already own a GoPro Hero 3, 3+, 4 Black or 4 Silver, you can bring your own camera to the GB203 gimbal.  The Typhoon G will still come with everything you need to fly and also the SteadyGrip mount to use the GB203 as a handheld gimbal for only $999 which is $300 less expensive than the Typhoon Q500 4K.  A great value package that will give you the rugged waterproof and high video quality of a GoPro and also all the great features that you can expect from the Typhoon series of aerial vehicles.

For more information on the Typhoon G, check in to Yuneec.com and stay tuned to Busted Wallet for another hands-on in-depth review of the Typhoon G once it is released!