There are plenty of Bluetooth speakers on the market, but there are not many that are made specifically for use in the shower. The iDevices iShower2 makes it possible for you to listen to audio from the comfort of your own shower. Thanks to Bluetooth, your phone or music device stays safe and dry and thanks to the iShower2’s water-resistant speaker – it too stays safe and dry. Recently the fine folks over at iDevices sent over an iShower2 for us to test and review, here’s what we discovered: 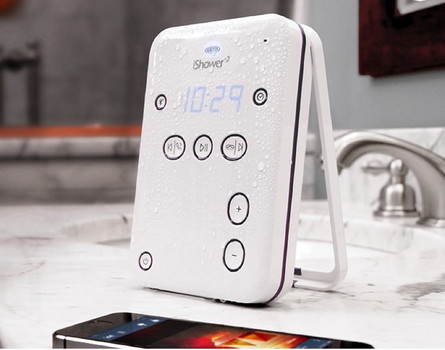 The iShower2 doesn’t look like your typical Bluetooth speaker mainly due to it’s sleek, modern design and because the actual speaker is located in the back of the device. Having the speaker in the back of the device seems counterintuitive at first but it’s done so the sound projects off of your shower’s wall to enhance the music’s sound. The iShower2 has large buttons that make it easy to control the device with wet, shampoo covered digits. It has a fold-out stand that can be fully extended to used to hang the speaker from your shower head or it can be used as a kickstand and propped up on your bathroom counter. The kickstand even has a rubber grip to help keep it upright on slick surfaces. The iShower2 comes with an optional shower mount that can be stuck to your shower’s wall. The speaker can easily be attached and unattached from the mount in between uses. The iShower2 can also be used as a speakerphone while in the shower so you don’t have to miss important calls. Unlike most Bluetooth speakers, this device is doesn’t have a rechargeable battery. Instead it’s powered by 3 AA batteries which are included in the box. Requiring batteries seems a little antiquated but the iShower2 still boasts up to 25 hours of playback time using traditional AA batteries which is kind of impressive.

Thanks to the iShower2’s extra large buttons, when your phone is paired it is very easy to control it via your phone or the speaker itself. Once paired you can play and pause audio, skip tracks, and control the volume. The iShower2 also has a digital clock that is visible by pushing the ‘clock button’ so you can keep tabs on the time in between belting Katy Perry and Queen songs so you’re not late for work.

We did have some difficulty pairing our phone with the iShower2 initially so be sure to follow the directions included in the box. When you first turn it on and press the Bluetooth button once, the display will say “Use 1.” To pair it to your phone, you are supposed to hold the Bluetooth button down longer until the display reads “Use 1 Open.” What the heck is that supposed to mean?! Anyways, from here you should be able to pull up the iShower2 on your phone’s Bluetooth device list and tap it to pair. However, this isn’t the end of the pairing process for this device even though it is on most of the Bluetooth speakers we have reviewed here at Busted Wallet. Instead you also have to push the ‘play/pause’ button on the speaker at the correct time to complete the pairing process. We couldn’t get it to connect to an iPhone 5 in any other way than specifically how it was mapped out in the included instructions. Little bit more difficult than it needs to be but once the iShower2 is paired with your device you won’t have to go through the weird process again.

Since the speaker of the iShower2 is on the back of the device, it uses the natural acoustics of your shower to amplify the sound without blowing out the speaker or your ears. The quality of the sound is pretty decent though it gets a bit distorted the more you turn the volume up. However, this reviewer rarely turned the volume up high in the shower – it just wasn’t necessary. We did bump it up a bit while using it outside of the shower since the speaker is no longer using a wall to bounce the sound off of. 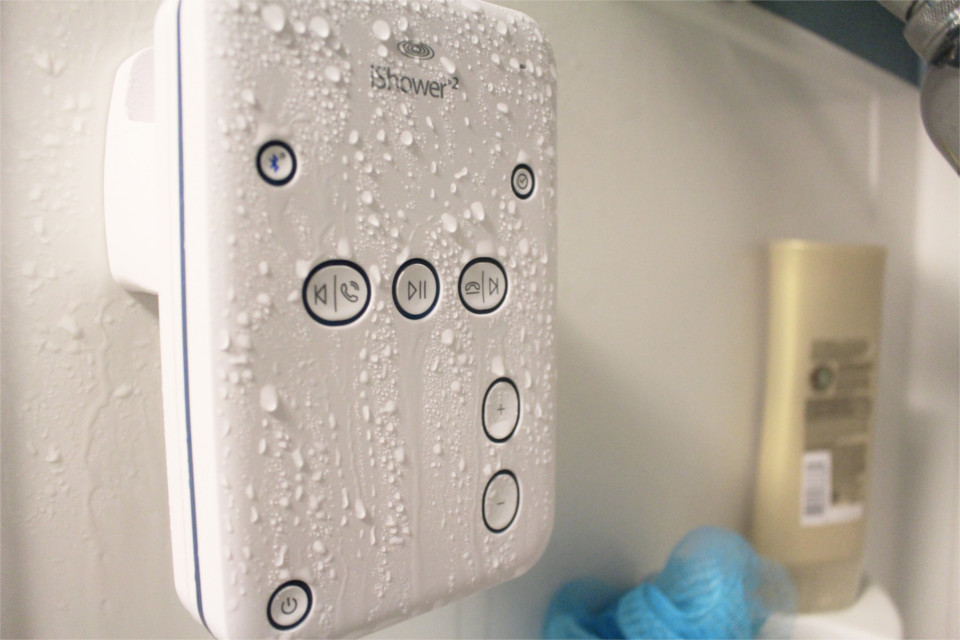 The iShower2 is water resistant, not waterproof meaning it’ll tolerate a good amount of splashing and spraying but it’s not meant to be submerged. We used the optional shower mount and have it place approximately 8 inches away from the shower head so it’s seen a fair amount of water sprayed onto it. It handles the splashes without a sweat or dent in it’s quality of sound.

There are cheaper Bluetooth shower speakers on the market but the iShower2’s quality and multipurpose use makes it a great value. While it was made to be a speaker for the shower (hence its namesake), we also found it to be a decent all around Bluetooth speaker. The iShower2 basically follows us around the house and office thanks to the handy kickstand. Besides the shower we could see the speaker being used poolside, in the kitchen, and out on the patio while doing yard work or grilling out. The need to have to purchase AA batteries adds a bit of a maintenance cost to the iShower2 but you can purchase a set of rechargeable batteries with a charger for around $15. Better for the environment too.

iShower2 Bluetooth Speaker - Tech Review
iDevices iShower2 is more than just a shower speaker. Thanks to its portability, you will find yourself using it more while you're out of the shower than while you're in it.
Design9
Ease of Use8
Sound Quality 9
Water-Resistance 9.5
Value8.5
Pros
Cons
8.8Overall Score
Reader Rating: (2 Votes)
9.5