If you call yourself a snowboarder and you haven’t heard of Never Summer Industries, I am doing you a huge solid and you owe me your first born.  Never Summer began building boards in 1983 – only 6 years after another well known company got its start – and is located at the base of some crazy awesome Rocky Mountain slopes.  Each board is handmade in Denver, Colorado, with a focus on high quality and evolutionary technology. This season we hooked up with our pals in Denver to put their newest women’s all-mountain snowboard known as the Raven through the gauntlet! Record low temps and insane snowfall made this the best snowboarding we’ve seen in years in the Midwest – so we took full advantage and sent the Raven flying! 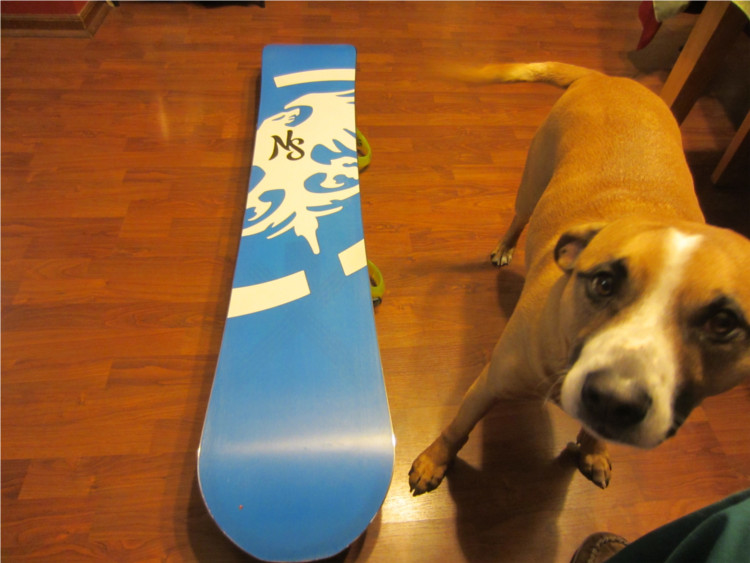 Even Ogie wants to shred the NS Raven – but you’re a dude, DUDE… Seriously!

For me, the only bad thing about this board is that I had to christen it on the relatively flat slopes in Michigan versus back in Colorado on the terrain this board deserves.  Ladies, the Raven is beautiful in both appearance and feel; it is the perfect all mountain board for the aggressive female rider (and if you’re name is Lenore,  its your destiny to own the Raven)!  Whether you want to float through the powder or cut a deep carve into a steep slope, the Raven can handle it.  This board was made for the aggressive rider, not the “only-on-a-sunny-day-on-groomed-runs” person who calls themselves a rider; the Raven  is built for performance! 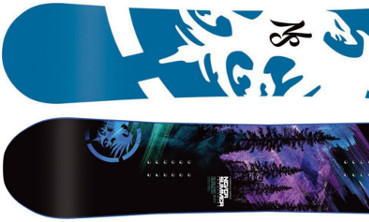 After 30 years of designing snowboards, Never Summer has got it down to near perfection.  I honestly can’t think of how to make this board any better.

The Superlight Wood Core and Carbonium Laminate Technology has made this board light and flexy in all the right places, yet strong and responsive allowing for amazing response and carving ability.  It has such fantastic response time, in fact, that I will admit I caught my edges a couple times on my first run because it took me a bit to get a feel for the board – my previous board was purchased in 2003, no RC action (or shape of any kind really), no sidewalls, no Carbonium, and was very rigid. . . anyone that is a serious snowboarder (or skier) knows that the technology is changing as fast as cell phones, so it was a bit like going from a 2003 2-door cheap car, to a 2014 Cadillac!

Speaking of the Rocker Camber (RC) profile, that was one of my favorite things about the Raven.  When I was a lift op I had the chance to test drive a board with some crazy RC going on, and remember being SUPER impressed with how I was able to carve and hold an edge on the ice (I think I took the sample board down Larry Sales at Winter Park at the end of a sunny, non-powder, spring day – anyone who has been there knows that run gets some crazy ice on it at that time).  Needless to stay it took a bit of getting used to (I was over carving like crazy on the first couple runs), but once I did, I was in heaven!  As I’ve said already, the Raven carves like a dream, holds an edge like nobody’s business, and has response time like no other.

I could go on and on about all the freaking awesome design features, but the ones mentioned here are my favorites, and what I think made the most difference in my enjoyment of the Raven.

Maybe it’s because my previous board was really firm, but this board feel SUPER flexy.  On the Never Summer Felx Chart the Raven rates a 4 of 10, so it’s on the soft side.  What does this mean for your ride? Amazing response, deeper carves, and you literally feel like you are floating through the powder.  Usually, a more flexible board will mean less control on choppy snow, and the first time I came down from a steeper run into some rough snow it took me a bit off guard.  However, I have tested flexy boards that were so bad that I felt out of control – that is not the case here – the Women’s Carbonium Damping System (WCDS) absorbed the shock and provided for a surprisingly smooth ride in even rough conditions.

Not qualified to rate!!

I am not a park rat – not even close!  I took the Raven over 2 fun boxes, one with about a 2 foot drop (please, stop laughing!!), and I didn’t break anything or land on my tailbone .  .  . sorry I can’t give a review of this, but I really feel like this board is meant for aggressive downhill carves more than for playing in the park.

Like I said in my opening, I christened this board at Crystal Mountain in Michigan (“Mountain” is used loosely in these parts), and while we have had a pretty awesome season for snow, there was not the knee deep powder I grew accustomed to in Winter Park, CO.  We did have fresh snow, and it was snowing during our testing sessions, but only about 4 inches of actual powder on the hills.

That being said, I did dip into the the trees where there were spots with about a foot of powder and it was like floating – if you are a wake-boarder, it is a similar feeling, only without the pressure or force of the water against the board . . . just fluid.  The design of the tip of the Raven has an elongated nose which creates less resistance and allows the board to ride over the power nicely.  I only wish I would’ve had some waist deep powder to really test it out on!!

Groomers in the Midwest often mean ice – and the Raven tackles it without a hitch.  The Rocker and Camber technology provides excellent surface contact so you could carve a freaking ice sculpture on your way down a sketch slope!  I was purposely aiming the Raven at areas that had been scraped off just to test it, and it carved right through those spots with no skipping or chatter.

So you may be asking, “why did you give it a 9 of 10 for groomed runs?”  My answer – “because the Raven deserves better than a freaking groomer!!!” 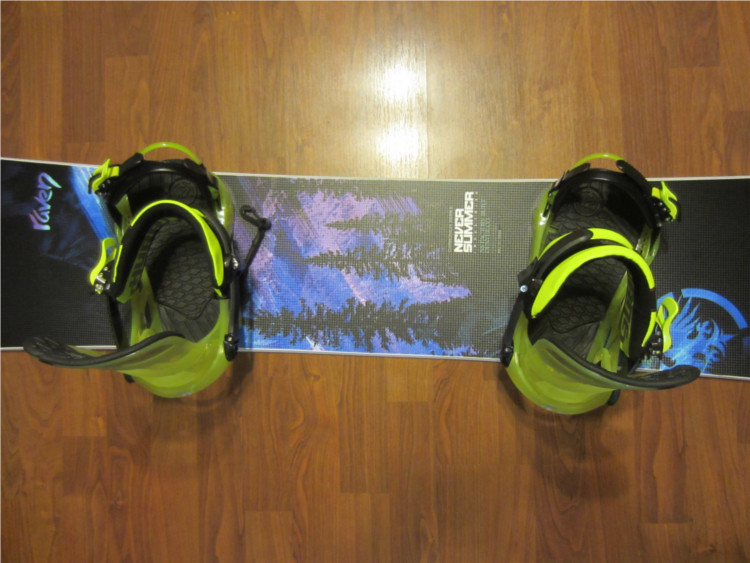 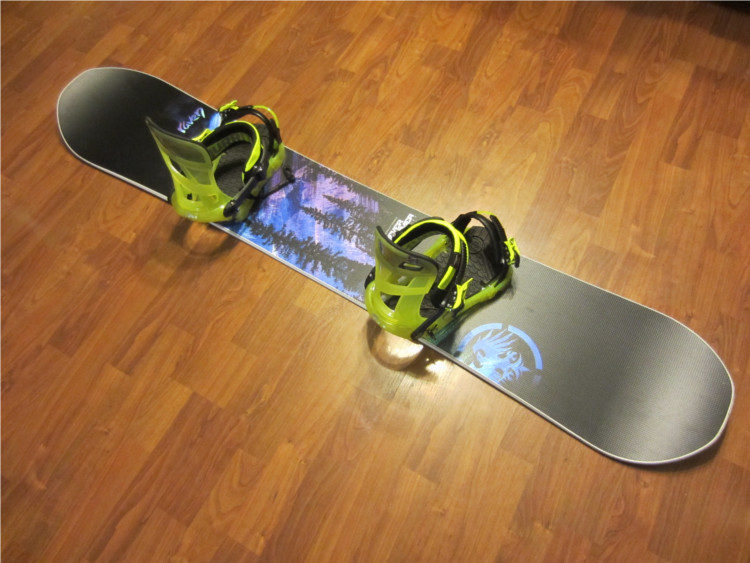 Um, yeah, this is worth every freaking penny.  If you’re worried you can’t afford it, do like all good ski bums and learn to live off of tortillas and peanut butter, save your money, and get awesome gear – like the Raven.  The Never Summer pages lists it at $499; the fact that the Raven is so advanced technologically, and the fact that this is an all mountain board, the price is worth every bit you pay for it!

Buy Now: $499.99 Find a Dealer
Never Summer Raven - Women's Snowboard
Buy it. Now. If you want to enjoy riding to the fullest extent, you will do just that with Raven. If you're a dude, buy this for your girlfriend (and get the Cobra for yourself while you're at it) - if she's cool, it will be as valuable to her as an engagement ring. Don't be driven into madness - listen to the Raven and look for your perfect board "nevermore" . . . you have found it!
Design10
Flex9
Powder9.7
Groomers9
Durability9.5
Value9.7
9.5Overall Score
Reader Rating: (26 Votes)
4.9