Escort is one of the most trusted names when it comes to radar detectors. In the world of radar detection, you’ll frequently see multiple Escort models topping the list. Their latest offering, the Escort Redline EX, could best be described as taking little bits of the greatest features from the entire Escort product line and fitting them into a single unit. Then adding a few features that make this device smarter than your average detector and voila, Escort Redline EX.

First impression of this unit is an aesthetically pleasing design that is pretty large with a “right-sized” screen that isn’t overly large, yet big enough to read. The unit doesn’t hide very easily on the dash, but I was able to tuck it under the rear view mirror so it is not in the way too much.

The forward facing screen has a nice OLED screen that is easy to read in both daylight as well as night time. On top of the screen is a nice LED bar that will light when an alarm is going off. This is great for grabbing your attention in case you didn’t’ hear the alert go off. The LED bar can also be configured to change colors based on the type of alert detected.

A great addition is the ability to change the default colors as well. This helps the Escort Redline EX fit into the color pattern of your dashboard. While the color choices are red, blue, green & amber, it would be great if they could allow you to custom choose a color.

One of my favorite design aspects of the Escort Redline EX is the mounting system. The large suction cup has an arm with a quick release magnetic mount that allows the main unit to be quickly removed without having to mess with the suction cup. The design works very well to hold everything in place even on bumpy roads while being able to effortlessly remove and replace the unit while always keeping it positioned in the same spot.

The power cord that comes in the box is coiled to stay out of the way and I found it plenty long enough to even reach the rear view mirror. At the outlet base is an easy to use Mute button, and an LED that will act as a visual indicator during an alarm. You also don’t have to give up a charge port because a 2A USB outlet is also included to charge your device as well.

On the display, you’ll be presented with your GPS speed, alert status, Bluetooth status & current speed limit – where available. When an alert goes off, you’ll also be presented with a display that is easy to read at a glance, keeping your eyes on the road as much as possible.

A series of buttons on the front are easy to access, although I did find that when connected with Bluetooth, I really didn’t need them at all.

To compliment the visual cues, there is also a speaker. The speaker not only provides the piercing alerts of a possible threat, but also provides spoken warning of the details. Those piercing alerts sure do their job of getting your attention, but can also be a bit startling. Thankfully, Escort has provided a very toned down version that sounds more like chimes than a digital bird on drugs.

The Escort Redline EX connects via Bluetooth to your phone & integrates with the Escort Live app. This app is available on both Android & iOS. 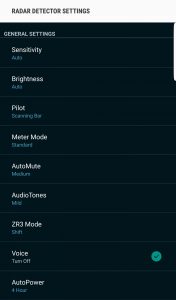 Probably the greatest benefit of the app is the ability to fully configure the Escort Redline EX using in-app menus. Every setting can be modified right in the app and is lightyears better than trying to navigate the menus using the device buttons and the screen.

The app also allows for the current speed limit to be sent to the device based on your GPS location. The current speed limit will display directly on the device and by default, you will receive an audible spoken warning from the Escort Redline EX when you are driving over the speed limit. At first, this is pretty neat. Then, it gets really annoying when you are travelling through an area where the speed limits suddenly change. If you haven’t slowed down before the change, you will get an over speed alert. Every. Time.

Another great benefit to the app is access to a network of live notifications. This includes a database of common threats like speed cameras, speed traps & red light cameras. It will also add your alerts to the database and warn you of other users alerts as well. This means you will be notified of an alert before it is even in range!

Worth pointing out that all of these cloud features are free for the first year, but after that, you should expect to pay $24.95/yr to continue coverage.

A combination of notifications and speed warnings is the low speed muting Escort calls the “Cruise Alert” feature. This feature will automatically reduce alerts and provide very low key notifications of alerts when your current speed is below the speed limit.

Using the app dashboard, during an alert, you can easily flag the alert as ‘real’ or ‘not real’ by a tap of your phone display. If you choose ‘not real’ the signal will automatically be muted and future alerts in the same GPS location will not set off the device. 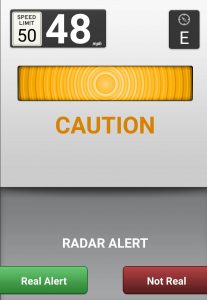 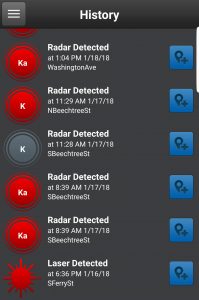 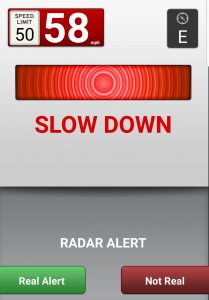 I think the app is really what brings the Escort Redline EX to life and makes it very easy to use & configure. However it’s not without its shortcomings. App reliability was rather marginal. This will probably vary by device but using my Galaxy S7 I found that each time I got in the car I had to initiate the app. Sometimes this meant I had to reopen the app, sometimes it meant I had to re-initiate the Bluetooth connection. Once open, everything ran smoothly, but I wished the initial detector to phone connection was a bit more automatic & always on. Or even better, connected over Wi-Fi since most newer vehicles are now shipping with built in hotspots. In fact, we hear the Escort Max 360C may be just that, a cloud connected detector. 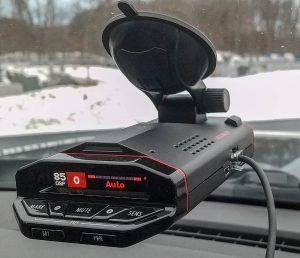 When it comes to performance, the Escort Redline EX is simply fantastic. I noticed reliably about a quarter mile warning. Alerts sometimes even beginning up to 3/4 mile away and occasional signals of even more. That is plenty of time to make sure you are driving safe.

An important piece of an alert is trusting it. This means avoiding false alarms. On today’s highways with many vehicles outfitted with adaptive cruise control, blind spot monitoring & crash warning, the typical stretch of road is flooded with radar and laser from all sorts of sources. The Redline EX features an IVT filter that drastically reduces false alarms from other vehicles. I did still get some, but not very many when I look at all the blind spot & parking devices surrounding me. Escort says this is an updatable technology that will stay up to date as more devices are identified using a USB connection to a computer.

Shopping centers and automatic doors are another notorious source of false alarms. While the Escort Redline EX can adjust its sensitivity on the go, false alarms by location have long plagued radar detectors. With Autolearn technology, when an alarm goes off at the same GPS point frequently, it will automatically be learned & muted. This works great to quiet down your daily commute and noticeably resulted in fewer false alerts over time.

Finally, it’s true that in some places, radar detectors are a no-no. Police have detectors that will detect your detector. For that very reason, Escort has developed a true stealth operation. This means that the Escort Redline EX will operate completely undetectable – other than its large physical presence in your windshield.

Escort stands by their performance promises also. In fact, if you purchase directly from Escort they guarantee accuracy in performance. If you get a ticket in the 1st year, they will pay it for you!

At $599.99, the Escort Redline EX is in a category of expensive devices, no doubt. There are detectors out there that are cheaper that may provide better raw detection, but few will be able to provide the same level of false alarm detection. The cheaper devices certainly won’t touch the level of protection you get with integrations into the Escort Live app, stealth technology & GPS either.

Escort Redline EX Radar Detector - Tech Review
The Escort Redline EX is a fully connected radar detector designed around being a device that you can trust. With excellent false alarm detection and long range laser & radar detection, once combined with crowd data from the cloud, you will be the first to know of anything ahead on the road.
Design9.5
App8.6
Performance9.7
Value9
The Good:
The Not So Good:
9.2Overall Score
Reader Rating: (10 Votes)
6.8