For decades, the concept of virtual reality has caught the imagination of the masses, but has also remained absent of accessibility to the common user. Sure, a variety of versions have been available for a long time, but you more than likely would have to go to a tech expo to gain access, and only for a short while with a pre-chosen program to experience. Today, however, we can take one step closer to the future, as we take a look at the VR ONE virtual reality headset from ZEISS.

Although the technology to experience an immersive 3D universe has been available for quite some time, bringing that technology to the user’s living room has challenged developers until now. With the VR ONE headset, the key to making this work lies within the cellular devices that we all have become so accustomed to in our daily lives. Today, our cell phones are not just for making calls. They come equipped with cameras, microphones, full size screens, and gyroscopic sensors, all elements that can contribute to a full virtual experience. By taking advantage of this technology, ZEISS has developed a simple and portable method for bringing the virtual world into any household.

The VR ONE fits much like a pair of ski goggles and is fully adjustable to fit any user. To operate, the VR ONE requires a cellular device inserted in front of the eyes. Currently, trays are available specifically designed to fit either the iPhone 6 or the Samsung Galaxy S5. 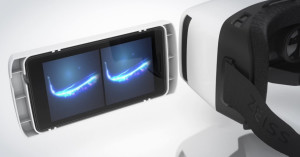 Although this makes the VR ONE limited to people who own these particular devices for now, ZEISS has stated that they are currently working towards expanding their selection. The tray does give access to the device’s headphone jack, so the virtual experience can include 3D hearing. The VR ONE‘s optical display rests just in front of the eyes while worn properly, but the field of vision is only as large as what a cellular device will allow and covers what we approximate is about 70% of the users full field of vision. Mostly made of plastic, the VR ONE is not cumbersome. There is a hard ridge at the bottom of the headset though, and although there is foam padding providing comfort and reduced external light, the plastic can dig into the nose and cheek slightly which causes some discomfort after prolonged use. 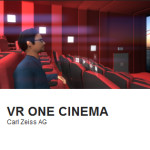 For the time being, there are only a few apps available for the VR ONE, and they tend to be rather limited. ZEISS has created a media launcher where the user can simply turn the head and focus in on what apps to experience. From that display, there are two Apps made specifically for the VR ONE by ZEISS. There is VR ONE CINEMA, which enables the user to sit in a virtual movie theater and watch MP4s or even full movies loaded into their cellular device. 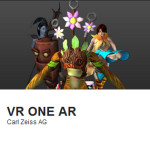 The theater itself is not rendered to a level of reality though, and it’s difficult to find the reasoning in sitting through an entire film with a device strapped to our faces in actual reality. Also, there is VR ONE AR, an augmented reality app that is again more of a novelty than anything. Used with a foldable cardboard cube that comes with the VR ONE headset, 3D characters and environments come to life before the user’s eyes. Although this specific app is minimalistic, it showcases some of the possibilities the VR ONE has for future development in gaming within 3D atmospheres.

There are other apps available created by third party developers that provide the virtual experience in a number of ways. The most basic apps put the user into a 3D digitaly rendered atmosphere of riding a roller coaster or other theme park rides. In these cases, the user has little or no control of the environment around them or their movements, and they are basically along for the ride, but able to look at their environment from any 360 degree angle. Some games are also available, but they are limited in controls because the VR ONE at this stage is only capable of controls through head movement. First person shooters for instance, will automatically fire the weapon, and the participant needs only to aim their head in the right direction. For those interested in a real world virtual experience, there are some 360 degree videos available taken from reality. Anywhere a 360 degree camera can be mounted, a video can be made available to VR ONE users to experience events from all angles. Video taken from a para-glider for instance, can make for an amazing experience of flight from ones living room, and in high definition.

We should also mention that there was some adjustment to having our senses bombarded with a virtual environment at first. We highly recommend using this device in an environment free of obstacles and that the user be prepared to remove the headset if they start to feel motion sickness or dizziness.

Because VR ONE is still in its infancy, applications are currently rather limited. We were able to burn through just about every app we could find in a matter of days and that includes the games that are out there. This can be a bit of a let down, and because of this, the VR ONE is more of a novelty item for the casual virtual reality experience as it stands. We aren’t going to hold that against ZEISS altogether though, because as we dove into the virtual experience the VR ONE has to offer, our imaginations ran wild with the possibilities that the future can hold for a product of this nature. The real genius behind the VR ONE is that it can incorporate any technology that a cellular device has at its disposal, and that prospect is rather limitless the more we examine it. Thanks to the invention of 360 degree cameras, 3D microphones, and gyroscopic sensors in our cellular devices, anything is possible within the imaginations of developers around the world. If someone wants to take a virtual break from the office, in a few seconds they can be sitting on a sandy beach listening to the soothing sounds of waves breaking. A prospective home can be toured virtually in seconds after a quick download to a mobile device. Gaming has great potential for advancement utilizing voice commands into the phone’s microphone, and as technology grows the worlds we are capable of immersing ourselves in will only grow in detail and realism. All it will take is for a few of the idea people of tomorrow to make their concepts available through a simple download to your cellular device, and that is very exciting indeed! 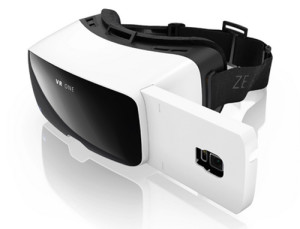 Let’s face it, the VR ONE really just facilitates technology we already carry in our pockets on a day to day basis. At $99 though, ZEISS has provided us with a method of making our cell phones capable of much more than we ever realized. While in its current stage the VR ONE is limited in a lot of ways, the future is not far off. The technology is available, and we anticipate developers will bring the virtual experience to the next level in no time.

ZEISS VR ONE - Tech Review
The concept of virtual reality has been in a state of technological development for a long time, and now it is available to us anywhere we want to take it thanks to the VR ONE headset. Although this take on the virtual experience is still in its infancy and applications are currently rather minimal, the potential for the future is quite exciting. By combining the virtual headset with smart phone technology, ZEISS has made an immersive virtual experience available that is only limited by the imaginations of the tech developers of tomorrow.
The Concept8.5
The Design7
The Experience7.5
The Potential9.5
Value7.5
The Good:
The Not so Good:
8Overall Score
Reader Rating: (4 Votes)
6.5