For the first time in the history of the company, Adams Golf has officially launched an entire family of golf clubs under one model name. That name… “SUPER S.” The SUPER S family (as you might expect) includes: Driver, Fairway Woods, Hybrids and Irons. The SUPER S lineup, from top to bottom, was designed to be easy to hit and give golfers of all levels the performance they’re looking for. Recently our test and review team was selected by the crew over at Adams Golf to put their new Idea SUPER S Hybrid Irons through the paces on the course. We took it a step further and spent nearly three weeks on the range in the simulator and picking away at local golf courses. And today we’re excited to share the results with you!

So, what sets this hybrid iron set apart from the rest? Well, take a moment to scroll over the image below to see all of the new and unique features the Idea SUPER S Hybrid Irons have to offer… 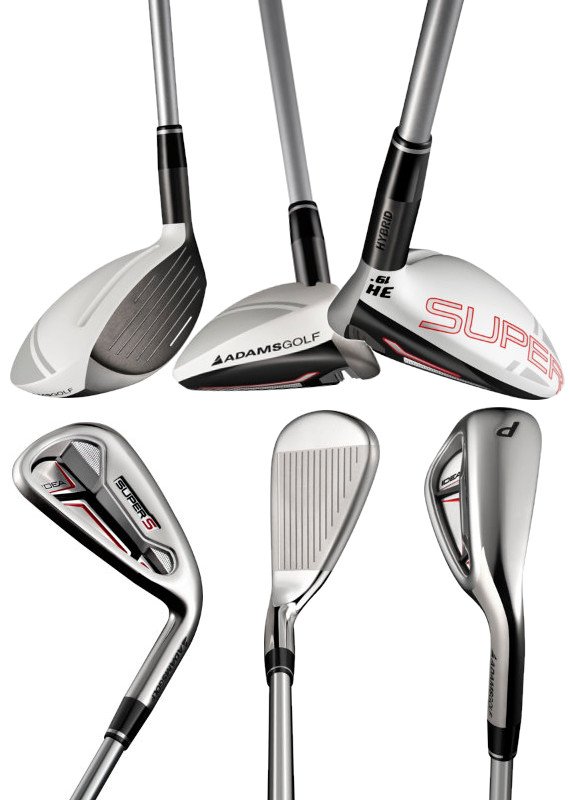 Set Includes: 3H, 4H, 5, 6, 7, 8, 9 and PW
The concept behind the Idea SUPER S Hybrid Irons was to blend Adams’ best hybrids and irons without having to sacrifice look or feel. A task that’s easier said than done! The entire set was engineered with a thinner face for increased ball speed – making them extremely easy to hit long distances and more accurately. The SUPER S Irons actually feature a new half hollow construction method. This new design is said to produce an iron with better stability at impact for less clubhead rotation. While the hybrids feature a Cut-Thru VST sole slot to increase ball speeds for greater distance.

In the SUPER S Irons, we incorporated what we have learned in our hybrid development, the irons feature a half hollow construction to make it perform like a hybrid, while still having the look and feel of an iron, giving golfers the best of both worlds. -Justin Girard, Senior Design Engineer for Adams Golf.

(7 out of 10) Overall, the majority of our testing crew were very happy with the feel the SUPER S Hybrid Irons delivered. They have a very solid feel at impact. Words like “powerful” and “crisp” were used by several testers when asked to describe this set’s feel and sound. We did however notice sublet weighting variations between some of the clubs – which was something that we weren’t use to and took some practice to get 100% comfortable with. This can be attributed to Adams patented gapping technology that is designed for distance and forgiveness, but leaves a little to be desired in the feel department.

(8.5 out of 10) The Idea Super S Hybrid Irons are among the top 3 best looking sets of 2013 for sure! The irons have an attractive look, but the hybrids are what truly stand out in the bunch. The matte white crown (a la – TaylorMade) is probably the hottest thing in golf since the hybrid itself and looks fantastic. The “SUPER” graphics are also eye-popping and oddly not a distraction in the least during our testing sessions.

Beyond the SUPER S’s dashing good looks, were most impressed with the incredible amount of features and engineering that have been built into this hybrid iron set. The standout design element our crew noted were specifically the hybrid crown and sole slots which not only look completely insane (and [email protected]$$) but actually works like a trampoline to send the ball rocketing off the face with an exceptionally high CT (Characteristic Time) of up to 230. Just 27 less than the USGA limit of 257.
Additionally, we were happy to find that Adams trimmed back the club faces across the board by 20%, testing the limits of club integrity and ball speed increases.

(8 out of 10) During controlled testing sessions on the simulator our review crew (consisting of 7 golfers) saw increases of +7.6 yards on average across the 3 and 4 hybrids when compared to their personal hybrids and 3/4 irons. Across the irons portion (5 – 9 iron) of testing we experienced a less dramatic increase (but still an increase) of +3.4 yards on average.
Not the staggering numbers we were hoping for, but none the less the SUPER S Hybrid Irons proved their technology is more than just hype.

(6 out of 10)  Overall our reviewers found the SUPER S Hybrid Iron set to be somewhat average in the consistency department. While testing for overall distance gained/lost on the simulator we also crunched numbers on consistency for distance (accounting for club speed) and the numbers proved to be somewhat mediocre in the end. Our crew experienced +/- 5.8 yards of variation in distance control on average with the 3 and 4 hybrids, while it was a smidgen better at +/- 4.3 yards of variation on average with the irons in the set.
The consistency numbers aren’t atrocious, but they’re a little higher than we would have liked to see in a “game improvement” set of clubs like the SUPER S line-up.

(8.5 out of 10) Throughout our testing and review sessions we actually found these hybrid irons to be rather forgiving all-in-all. On off-center strikes the ball was imparted with far lower spin rates than expected, leading to shots that were closer to the target line by 19.5% overall when compared to our testers personal iron sets.

The overall “sweet spot” proved to be rather large and easy to hit. We also found that the hybrids were vastly more fogiving than any 3 and 4 irons we tested them against!

(8 out of 10) We feel that this set is an honest to goodness fair value for golfers seeking to find a hybrid iron all-in-one package. In a perfect world you’d be able to snatch these up at your local sporting goods store for $599, but we don’t see anything wrong with the current $699 retail pricing.

We recommend this set for mid to high handicap golfers who are looking for some additional foreignness and distance in their game this season. We found the Adams Idea SUPER S Hybrid Irons to be incredibly stylish, forgiving and packed with technology that is geared to boost your yardage off the tee and from the fairways. Consistency may be this set’s biggest down fall, but overall it’s something that time on the range and practice can overcome in short time. A solid investment in your golf game overall.
Buy Now $699 or go to: AdamsGolf.com