WILSON!!!! You’ve done it again (in the most awesome way possible). The BLADE 98S and BURN 100LS are two of the best ‘all around’ rackets we’ve tested here at Busted Wallet. As soon as I picked these rackets up, my hand felt at home and empowered with the strong grip and light weight frame. I had the pleasure of testing both of these rackets in some of the most intense matches with my equally competitive counterpart, David, my brother (captured in the image above). Although these rackets were slightly more top heavy, I still felt comfortable in my swing. I felt way more power in my serve and confident in laying down some sweet spin on the ball. Perhaps a little too confident… I pulled off a spin so powerful that I scored on myself.  We’ll get to that in just a bit.  First, let’s dive in to each racket’s specs and see how Wilson pulled off not one, but two brilliant designs.

Wilson created an innovative PlayerID system, which allows tennis players to “easily identify the appropriate Wilson racket model based on individual play style.” As of right now there are three core playing styles in relation to the modern tennis game:

The BURN 100LS was designed for the Baseliner, giving more explosive power with added Spin Technology. This racket produces the heaviest ball possible allowing you to “Burn” through the competition.  I definitely felt very comfortable from the baseline.  The power and accuracy from my serve improved dramatically.  This racket has more maneuverability and is light enough to keep a powerful swing, set after set.  The rounded hoop creates a larger contact zone for a more aggressive vertical swing.  Plus, the parallel drilling provides a more forgiving sweet spot which helped me swing with more confidence.  With the high performance carbon fiber frame, I felt a major difference in stiffness compared to my previous Wilson rackets and helped for a more explosive serve.  The X2 Shaft provides a longer handle for increased leverage on two handed backhands (definite bonus with my back hand), plus it helps for better, overall grip changes. 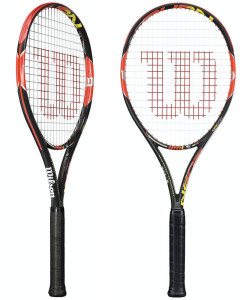 The BLADE 98S has an 18×16 string pattern, that delivers precision spin and control for an aggressive game.  The racket has parallel drilling and braided graphite, plus basalt to help improve performance.  The Blade is also lightweight providing faster swings.  This racket was developed with the “Attack” player in mind.  If you’re an aggressive player that wants a faster swing with more spin and precision, then I highly recommend picking up the BLADE 98S. This was the racket I finished with at the end of the day and was hard to put down. 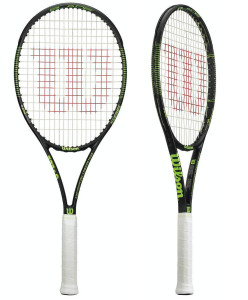 Now back to the famous spin… As my brother and I approached the 3rd set in an all out war, David sent one deep to my backside. I had to layout for a strong backhand that resulted in a pop up with an extreme spin. It landed a good 4 feet over the net on his side then took one bounce right back over to my side. In shock over the dramatic spin, I stood there and watched the ball spin by me. I quickly learned that Wilson’s 360 spin technology was quite literal. I had to pull back a bit on my swing until I got used to the spin as it pretty much does it for you. The string tension was excellent. I felt like my serves were much more accurate and twice as powerful. Even though the technology harnesses the 360 spin, I felt like these rackets were quite forgiving on some of the returns, ultimately giving me even more confidence in my approach.

There’s a reason why the BLADE 98S and the BURN 100LS are priced at $199.00.  The technology and craftsmanship that make up these rackets are of high caliber which is easy to see the moment you pick them up and begin playing.  I know I am very pleased with the build quality of these models and am confidant they will continue to improved my game thanks to Wilson’s vision and persistence.

Wilson BURN 100LS & BLADE 98S - Gear Review
If you're ready to improve your game and increase your confidence immediately, then take it to the next level and invest in either (or both) of these rackets. Trust me, you won't be disappointed… I'm not.
Spin Technology 10
Frame9.8
Shaft9.8
Power9.5
Speed9.8
The Good
The Not So Good
9.9Overall Score
Reader Rating: (67 Votes)
4.2