We lace up our shoes. We stretch our legs. We step out the door. We run…It’s one of the most basic of human functions, and yet after countless millenia as a species, it still holds importance in our culture. Some of us do it to maintain our health, while others are just looking for a few moments away from the insanity. On the other hand, there are those of us that are committed to the speed of it, the rush of competition, and the thrill of victory. This spring we tested the Mizuno Wave Paradox running shoe as our most important training tool in preparation of the Fifth Third River Bank Run.

It was in 1978 when the Grand Rapids Track Club joined forces with Old Kent Bank, and brought together 1,000 runners to take to the streets of downtown Grand Rapids Michigan for a 25 kilometer race. Now, 37 years later, what has become the Fifth Third River Bank Run brings in more than 20,000 competitors per year, with a broad expansion of events geared for all brands of distance competition. Now ranked as one of the premier road racing events in the United States, the Fifth Third River Bank Run is the site of American and World Record holdings, and a substantial purse of winnings for every event. It is an event that brings out the strongest of physical competition from all over, and we thought it would be a perfect way to test the Mizuno Wave Paradox from the moment we opened the box, to the last grueling stride over the finish line.

The aesthetic design of the Wave Paradox is inspired by a Japanese doodling technique, where a series of straight lines are given the illusion of being curved on the three dimensional surface. It’s almost immediately obvious upon first inspection that Mizuno has done away with traditional overlay construction, and built a shoe using thinly reinforced materials for an almost seemless build. For anyone interested in options, the Wave Paradox is available in three different color schemes, but all are a little intense on the eyes close up. If an expressively simple shoe is your thing, you may want to look elsewhere.

Most shoes require a “breaking in” period, where the shoe is given adequate time to loosen where it needs to around our feet for the best fit possible. From the moment we laced up the Wave Paradox, we noticed the Mizuno brand Dynamotion Fit, designed to deliver a snug fit throughout the shoe wherever it’s needed. We especially noticed that the front upper was much more rigid than other running shoes, and that did take some getting used to. The breaking in process took between one and two weeks for us, and that’s pretty common in our experience. We must remind ourselves that getting through the breaking in phase can be uncomfortable for a time, but it also is the early sign of a well constructed and durable running shoe. 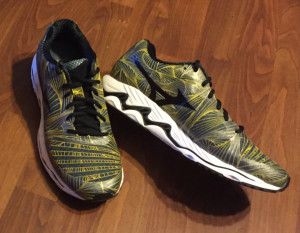 Ready to get started, we established a training regiment and took to the road. We immediately found the Wave Paradox extremely forgiving, smoothly taking each step from heel to toe. While researching this shoe, we learned that Mizuno suggests it be worn by more flat-footed runners. However, we were extremely pleased with this shoe’s ability to form to the higher arches of our feet over time. The Dynamotion Fit worked exactly as Mizuno suggests, and we enjoyed adequate support in all of the important places. As we approached those longer distances though, we did experience a certain degree of rubbing on the outermost (pinky) toe, with minor blistering as the result.

Waking up at 5:30 am on a Saturday is one thing, but learning that there’s a 100% chance of rain when your race begins? That may be a little rough for some, but on this occasion that just means optimal conditions for the final testing phase of the Wave Paradox. I’ve attended a number of races over the years, and the Fifth Third River Bank Run is something to behold. With over 20,000 competitors, and additional volunteers and spectators, Downtown Grand Rapids radiates with race day energy.

Like clockwork, in the 10 minutes before the firing of the gun, what was minor sprinkling became strong rain showers. Finding the right pace and position amongst a sea of runners and deep rain puddles, The Wave Paradox served me well. It was obvious early on, even with the wet conditions, the Dynomotion fit did a fantastic job of not only propelling me forward while maintaining pace, but working those side to side moves to surge past other runners remained effortless.

somewhere mid-race is the point where the mental battle begins, and my general tactic is to focus on the competitor ahead of me, real them in, and surge past them. It’s at this point that the Double Fan Wave in the heel and the forefoot Wave Plate of the Wave Paradox worked together to give a pliable heel to toe transition. Sometimes, making aggressive moves to whittle down the competition can result in a brutal pounding to the underfoot, but the Mizuno Wave Paradox provided the right amount of cushioning upon impact and propulsion from the toe on each stride.

Those last few miles can be exhausting and painful, especially if you don’t pace yourself correctly from the start. On this occasion however, I’m happy to say I had enough left in the tank to finish strong and dignified. The Wave Paradox weighs in at 10.6 oz, a remarkably light shoe considering it’s construction and the stability it offers. Solid stability and traction got me through the race, but the exceptionally light weight of the Wave Paradox carried me over the finish line with a full stride.

With training complete, and the race behind us, it’s time to move on to whatever is next. We put about 200 miles on the Wave Paradox this spring, and that begs the question whether there is another big competition on the horizon for these shoes. Upon inspection they’re in more than acceptable shape considering the mileage thus far. The uppers remain completely intact, and they are still holding a stable and secure fit during runs. The only visual wear we can find is on the undersole of the shoe, in the form of micro-cracking in the molded rubber underside, and minor frictional wear in the heal and toe. optimally, a running shoe should last 300-500 miles, and from the look of things the Mizuno Wave Paradox will make it into that range at the very least.

We’ve experienced great results with Mizuno running shoes over the years, and we thought our readers might enjoy looking at a few options. As an alternative to the Wave Paradox, may we recommend the Wave Rider 18, the next generation from last years review of the Mizuno Wave Rider 17. Slightly less complex in construction and design from the Wave Paradox, the Wave Rider 18 is amazingly comfortable right out of the box, more so than any shoe we’ve ever experienced. This generation of the Wave Rider series has also advanced since the last model, incorporating a seamless outsole design that is becoming more prevalent in the industry. Weighing in at 9.2 oz, the Wave Rider 18 is remarkably light for a shoe of its construction type. A bit less durable than the Wave Paradox, we recommend this shoe to the recreational middle-distance runner who likes their shoes to have a more traditional appearance.

Initially retailing at $134.99, but currently on super-sale at $76.99, the Mizuno Wave Paradox is more than a bargain! Well constructed and durable, you can be assured that they will make it through the entirety of a seasonal training regiment, perform on race day, and come back for more. Hey, these shoes did exactly that for us. Also eye-catching, if you’re into wacky patterns on your running shoes, the Wave Paradox is one of a kind.

Mizuno Wave Paradox: Fitness Review
From the moment we opened the box, we had our eye on the finish line. We took the Mizuno Wave Paradox to one of the grandest running events in the nation, and it stood its ground. Thanks to solid construction, optimal support throughout, and light weight, we had an amazing experience at this years Fifth Third River Bank Run!
Design8.5
Construction9
Comfort8
Performance9.5
Durability9
Value9
The Good:
The Not So Good:
8.9Overall Score
Reader Rating: (0 Votes)
0.0