Riddled with all kinds of controversy, the newest installment of the Metal Gear Series has landed at the Busted Wallet doorstep. With its release date over a week ago, we have been up many nights playing the new Metal Gear Survive to get our own take.  Konami has added another notch in the series and we could not be happier to give our honest opinion about their long-awaited title. With Metal Gear being one of our favorite game series of all time, we jumped at the chance to play the newest installment. By adding a survival element to the gameplay we love, Konami hopes to bring us to a new level in the gaming experience.  My fellow Busted Wallet Gamers, here is my review of  Metal Gear Survive for the Playstation 4.

The game starts off by getting your customized player sucked into a wormhole and transported to an alternate dimension, which is causing the destruction of your base from MGS V.  Solid snake flies off in a helicopter as you get ripped into the sky, all while dodging pieces of the damaged base being sucked in as well.  You awake in a place only known as Dite, a world populated with crystalized zombies known as wanderers.  Before you know it you are surrounded by a cluster of Wanderers and have to find anything you can to defend yourself.  Quickly you spot a gun and start taking down Wanderers left and right. You are soon overwhelmed by the horde and take off down the corridor of the building you awoke in. An informant named Goodluck tasks you with assisting the Charon Corps with their investigation of teleportation technology and collection of Kuban energy. Soon after arrival, you realize that there’s nothing left of Charon Corps, except for an old AI vending machine that seems to be battling with its multiple personalities.  Your new found friend(s) task you with locating motherboards from other AI’s to help further your information about the teleportation technology and giving hope to return you back to your dimension all while surviving amongst the climate as one might in real life.  Know you must “Survive”. 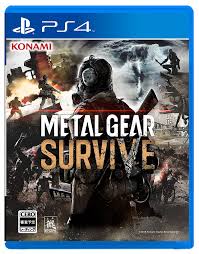 First and for more most, I would like to address the elephant in the room.  Hideo Kojima, the creator of the series, did not have any part in the development of this game.  From what I know, he left amidst the development of Metal Gear Solid V and Konami erased his name on all aspects of the game. With that being said it is easy to lose faith in the developers but I tried to keep an open mind. For those curious about how the game actually plays, know this is not a Metal Gear Solid title. Without the brilliant mind of Hideo Kojima, Metal Gear Survive is just a survival game that shares the Metal Gear name. Fans of Kojima’s titles won’t find the same tactical and stealthy antics, nor some insane story that has spanned over generations about nano-machines and clones. Instead, Metal Gear Survive is a sloppy version of the MGS V with the good parts taken out. It feels hurried and littered with concepts from other games that came out years ago. The game reaches out for all of these outdated styles only in an attempt to brand them as their own new and fresh idea.  The survival genre of games has come and gone. Thirst and Hunger meters are an interesting twist to the Metal Gear gameplay but became a nuisance shortly into the game, until finally when you are able to create clean water.  Then it turns back around to mediocre at best.  Curiosity did get a hold of me and I let them run to 0% to see what would happen, you die.  That is all.  Nothing exciting like I was hoping for, at least some sort of mockery or tease but I was let down again.

Fear not about missing the any of the details about the gameplay, the 2+ hour opening makes sure you fully understand every bit about the game before allowing you to adventure onward. So after all that abuse, I did find some good elements to the game.  The controls are that of the earlier games and relearning came quick and easy.  I found myself running and diving just like so many times before.  I have noticed the team has fixed bugs rather regularly, which means they are taking some of the criticism to heart.  I only hope within a few months they can polish some of the other issues that we gamers are having.  Even though the genre is quite outdated Konami does do the survival element fairly well. Resources are easily located and replenish after a day or two.  Adventuring out does prove to be rewarding even if short-lived by the use of an air tank.  Overall the single-player mode does provide some thrills and does deserve some credit for being mildly entertaining. 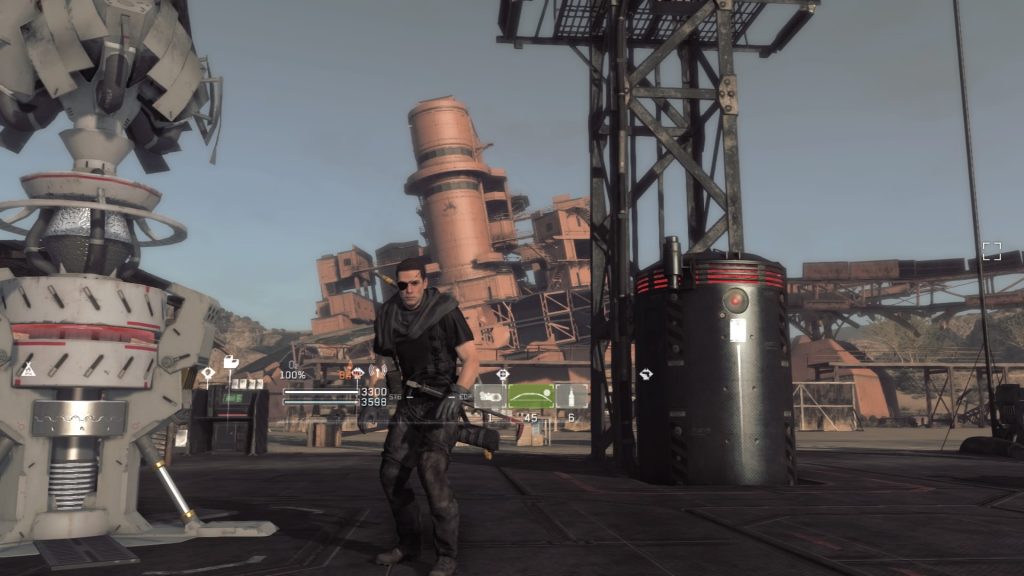 It has been 3 whole years since the last installment of the series has been released.  In the world of technology that is an extremely long period of time.  You would think that Konami would take that time to fine tune their work from the previous title but it seems they did not do a thing.  They took Afganistan from MGS V, added some destruction, then slapped a grey haze over it and called it good.  Nothing about the graphics changed. I am not really expecting 8k technology but a little improvement would be nice. At least show that you did not completely rush this out just to be a money grabber. Areas not covered in “dust” do look pretty awesome but that is to be expected.  The cinematic style movies are not even enough to get you hooked and yearning for more. That is a staple for any game nowadays.  It should have Oscar quality for each and every scene.  Okay, that might be a little far-fetched but the idea is there. As a gamer, I want to sit back and say “damn, that looks amazing”. With half the view in a grey haze, I can honestly say I did not have that moment while playing Survive.

At its core, Survive uses the same formula we all are familiar with. Over time you gain new utilities and abilities that help in the rebuilding of your Mother Base. It’s a slow progress, but rewarding in the end. It does take a few good hours before you can say you even unlocked the real game. You begin with a broken down base of operations, littered with junk, which must be expanded and upgraded over time. All of the necessary resources are gathered by heading out into the “dust”, picking up supplies like wood, nails, etc, before heading back to base and utilizing them for upgrades.

The more upgrades you obtain, the further you can venture out into the world. You do this all while defending your base from the hordes of Wanderers.  The later upgrades tend to take a substantial amount of resources forcing the exploration thus making scavenging feel like a task. I was very upset to find out that vehicles you come across with the “dust” cannot be taken into the safe areas.  There is no reason why they just instantly explode. Fast traveling is an option, with wormholes that must be unlocked but I still would have liked to cruise around in a jeep, possibly stopping to check out some unexplored areas. 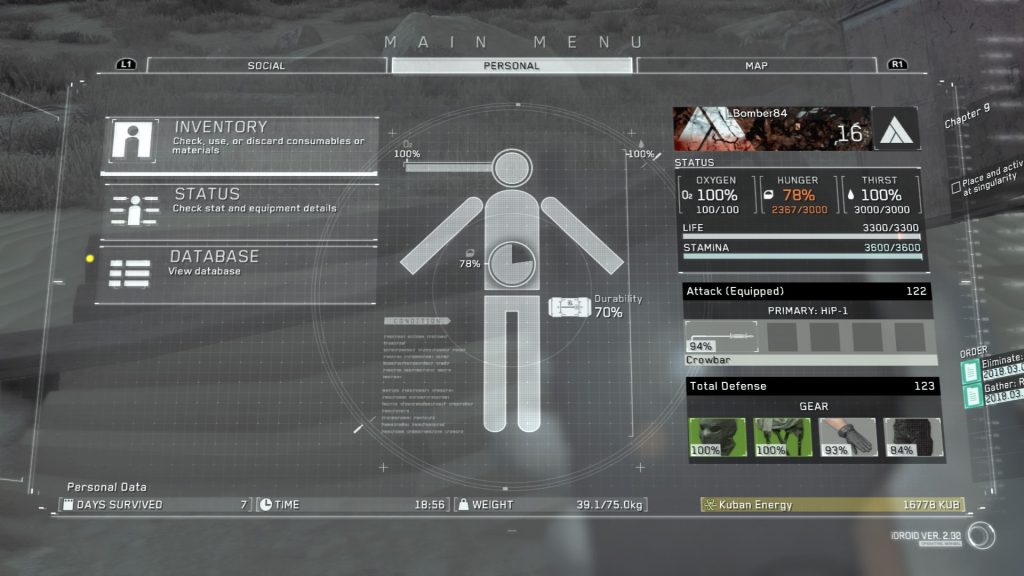 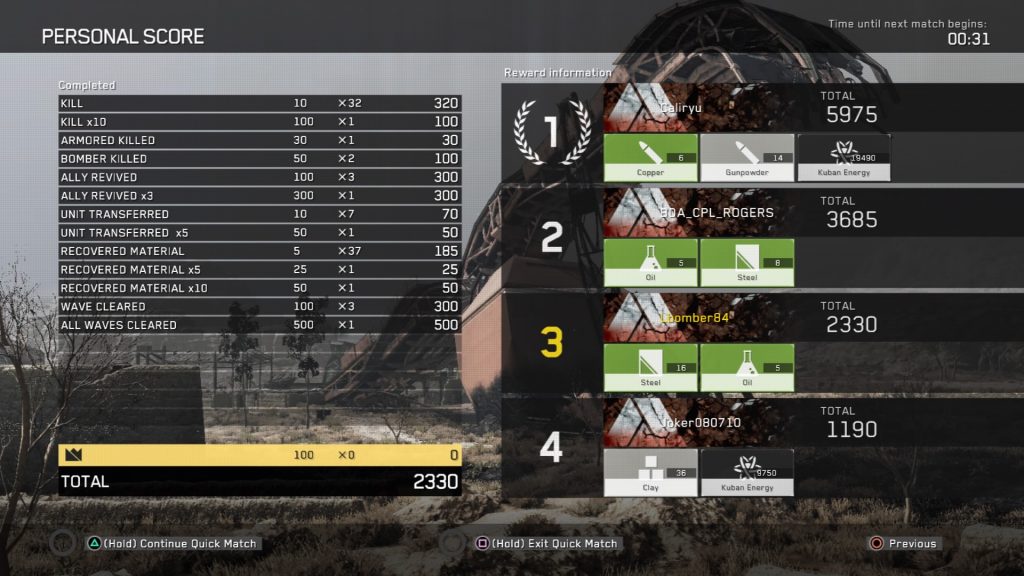 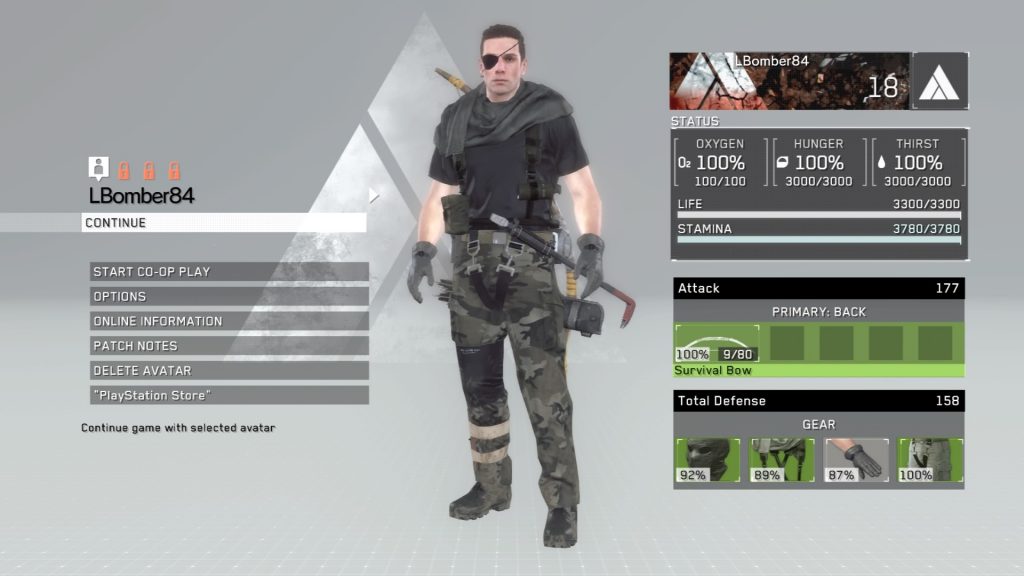 One of Konami’s biggest selling points for Metal Gear Survive has been its co-op multiplayer, but to me, it seems more of a single player game with a co-op feature available. .You can play the entire game from start to finish in single-player. But in all honesty, that’s what I do anyway. Co-op missions are story-based base defense missions that offer up bonuses for completion. With that being said, I still had a lot of fun playing them.  It felt like what I have imagined robbing a bank would feel like.  You all have a common goal but when it comes to resources it is every man for themselves. I kind of felt bad for everyone I played with for the first couple of times I played.  My instincts were to take all of the resources in the surrounding area and leave nothing for my counterparts.  Most did not seem to mind early on but later in the battle they were scavenging around for items I had already taken. Let’s really be honest here, I really am not all that sorry. These battles do, however, drain all of your resources. I thought I had a good stockpile going in but soon realized I was dead wrong. Winning bonuses did not even come close to the amounts I had spent over the course of the round.  I did gain some new weaponry but not good enough for the time I spend collecting everything.  But overall I did enjoy the experience.

Every time you level, the enemies do as well completely counteracting any stat increase you make. Thus making leveling up is a complete waste of time. Why even have a stat system at all if the enemies grow with you.  I would have loved to see an increase in hordes, making me feel more of a bad ass as my level 18 takes down 50 or so level 5 Wanderers upon visiting a lower area. And the Wanderers have to be the dumbest enemies I have played against in a long time.  By magically placing a metal fence in front of them, they decided the only way is to go through it.  Instead of realizing they could just go around, they just allow me to shove a pole through the gate to easily kill them.  Or I just walked to their sides and cut them down with the crowbar.  As far as my useless teammates that I have saved around my home base, I really am debating why I keep them around.  They really do not seem to serve any purpose besides making sure my potatoes grow.  I felt the developers missed the opportunity to create a one-of-a-kind AI and instead made a generic zombie that we all know.

Metal Gear Survive - Video Game Review
The money grabbing microtransactions that new games have frustrated me to no end.  I am sick of buying a new game to have new DLC come out a week later.  Or the day after release people are level 60 because they bought a stat booster for $5.00.  Konami does take the cake here for having us pay $10 for an extra save slot.  Granted the price tag is lowered but leave that kind of BS for mobile apps.  All in all the game is fun, only if it did not have the Metal Gear name.  I admit I have extremely high expectations for any game that shares the title.  I have been playing the Metal Gear Series since the days of the Nintendo, and will continue to play them until my fingers fall off.  Konami, I urge you to shake this one off and take what we gamers are saying to heart.  Use this as a learning opportunity for the future and create the games we know and love.
Game Play6
Graphic6.2
Equipment8
Multiplayer8.2
Artifical intellegence6.7
The Good
The Not So Good
7Overall Score
Reader Rating: (0 Votes)
0.0