What kind of skier are you? Do you like to carve your way down the bump runs? Maybe you’re into floating through the powder above tree line. Perhaps, you occasionally like to dull your edges ever so slightly in the rail yard or huck some kickers in the terrain park. I’ll admit it. Between all of the aforementioned mountain activities, I’ve found quite a bit of enjoyment hauling some ass down the wide groomers. 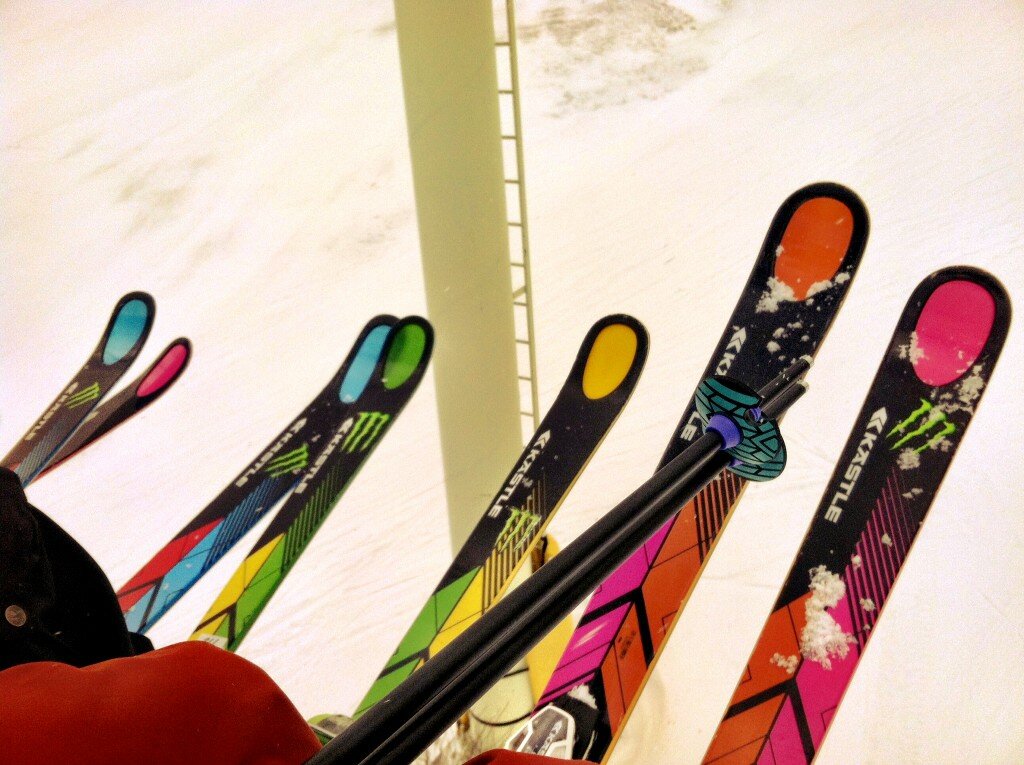 I remember a time when I would stare at a quiver of skis, and have to make the crucial decision of what kind of skiing I want to do today. If it was a powder day the decision was easy, and out came the fatties. On the other hand, if the snow was less than ideal and I had a hankering anyway, I’d bust out the short twin tips and hike the halfpipe all day. I had some skis that I called “all-mountain”, but really they were just the average of every aspect in a ski’s possible construction. They were good enough in their time, but they never really performed optimally in most conditions. Thankfully, ski construction has evolved quite a bit in the last decade. For those of us without the luxury of purchasing every last style of ski known to mankind, today’s all-mountain style of skis offer everything you’ll need in one neat little package. This season we put the Kästle XX90 James to the test.

To explain everything you could ever want to know about Kästle’s XX90 James twin tips who better to take you though the ins and outs than the skier who designed them from the ground up? Check out the embedded video below to hear from Colby JAMES West and get your daily dose of ski-porn as well…

“On any given day, they are made for any given conditions you may encounter. When I was a teenager, I used to ski at Waterville Valley, where I can proudly say that I have skied backwards down every single run they have. It took me at least two days, but I did it. I wish I had access to the James models at that time because the early rise, coupled with the fat stability turned out to be perfect for playing around backwards and forwards on the entire mountain.” -Colby James West

The true twin tip shape of the XX90 James makes it the perfect for solid carving. Basic turns on the groomers are unquestionably no problem. Hitting the bump runs at a moderate speed? Piece of cake! Be careful though if you want to push the speed in the bumps. We started to lose our edges a little during those tight carves.

The Hollowtech feature on Kästle skis is designed to provide a more stable ride. Whether it’s from the initial impact after landing a big jump, or riding out those not-so-sweet spots on what used to be groomers at the end of the day. The idea behind this technology is to reduce the weight of the tip and tail, and thereby reduce the amount of vibration that occurs due to the impact from the terrain. Based on the test runs we took with the XX90s, results are kind of up in the air. The stability of the skis certainly didn’t suffer due to the construction, but there wasn’t a lot of improvement over our good old fashioned wood-core skis either. These skis are pretty stiff throughout too, so you can expect a steady ride through the harsh stuff. When we took them into the steeps of a tracked out blue-black run, we found we could get these bad boys up to about 80% maximum speed before they began to slip out from underneath us.

The all-mountain ski is traditionally a mid-fat in its construction. It’s gotta be able to make bold moves and float in powder at the same time. We were pleasantly surprised when we took those untouched lines through the trees with the XX90s. Mind you, skiing any all-mountain ski, you’ll never get optimal results in big mountain powder. But we’re not doing that today. If you get yourself in some of the basic knee deep stuff, the Kästle XX90 James will get you through it.

We’ve all been there before. We have our skis slung up over our shoulder on our way to the base, and damned are they heavy! Honestly, I had some worries the moment I pulled these skis out of the rocket box. My shoulder felt the brunt of the weight pretty quickly. There’s a crucial balance in the construction of the mid-fat all-mountain ski. It has to be wide enough to go everywhere, but light enough to perform in the terrain park. Although my initial reaction to weight of the XX90 was troubled, I was pleasantly surprised by the amount of float I got out of my takeoff on the first kicker. Adding rotation to the mix wasn’t all that difficult either. One of the benefits to Kästle’s patent-registered Hollowtech technology is that the forward and backward weight of the ski is reduced, and that lessens the load when making mid-air movements. I’m no physicist, but there might be something to this. Maneuvering in the air was easier than expected, and that last critical preparation for the landing wasn’t all that difficult either. Although these skis were obviously not developed specifically for use in the terrain park, they can dish it out as well as you can expect from a mid-fat.

As a brand, Kästle has a specific approach to the look of their skis. There is a universal design element throughout their line, and from one ski to the next the only obvious difference is a basic choice of color. If you’re looking for exciting and creative design, this is not the ski for you. 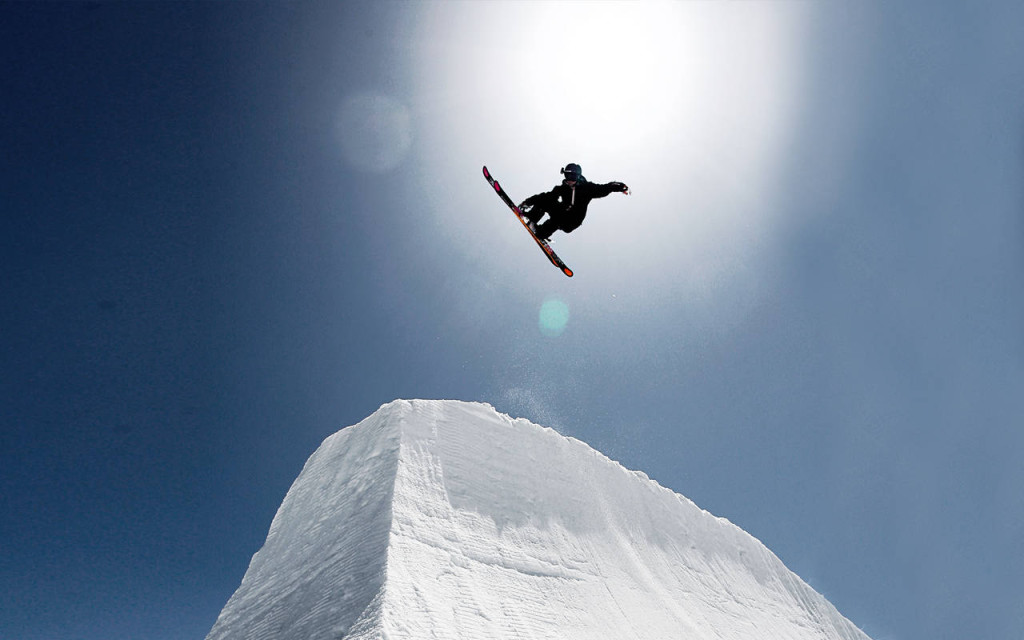 I can best describe the design of these skis as a throwback to the race skis of the mid 1990’s. This approach to the design brings me back to my teenage years, and I can appreciate that. However, when you throw in the pseudo-neon color pallet and the alien appearance of the Hallowtech tip and tail, the resulting composition is a little lackluster. The tinge of transparency in the Hollowtech tips can be eye catching at first, but it just doesn’t work alongside the sharp and angular shapes found throughout the rest of the design. I’ll admit that design is purely subjective in a ski, but I’m the one doing the review here, and I’ve concluded that these skis are nothing special to look at.

All-mountain skis are arguably a great value no matter what. When you consider the cost in owning a full quiver of skis, each designed for a specific activity, it just makes good sense to buy one pair that can do everything. Although the retail price of $749 is in the higher end of the all-mountain ski industry, the extra bucks you spend a pair of Kästles will get you broad range and consistency.

Buy Now $749
Kästle XX90 James - Ski Review
If you’re skiing with that one buddy who wants to go everywhere on the mountain, it’s good to have a reliable pair of sticks that will take you there. The Kästle XX90 James can handle that job (even if they are a bit on the ugly side).
Carving7.5
Stability8
Powder8.5
Park8.5
Design5
Value8.6
The Good:
The Not so Good:
7.7Overall Score
Reader Rating: (54 Votes)
4.4